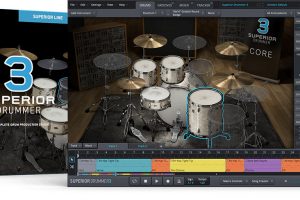 Toontrack Superior Drummer 3 v3.2.5 Update WiN, MacOSXWiN: Team V.R | 258.35 MB | MAC: Team V.R | 308.32 MBBuilding on the legacy of its predecessor, Superior Drummer 3 was redesigned from the ground up to introduce a completely new and improved workflow, countless added features and an unequalled amount of raw sound material. With Superior Drummer 3, you are in total control. Welcome to the future of drum production.FEATURES – AT A GLANCEIn excess of 230 GB of raw, unprocessed sounds in 44.1 kHz/24 bitRecorded with an additional eleven separate room microphones set up in a surround configuration for a complete immersive experiencePlayback in stereo or up to 11 channel surround systemsApprox. 350 vintage and classic drum machine soundsNew and improved scalable interface with detachable windowsEdit Play Style, Tap2Find, Song Creator and Song Track features as well as improved workflow and search functionalityBuilt-in MIDI grid editorDAW automation for built-in macro controlsSupport for keyboard shortcutsA CREATIVE PLAYGROUND WHERE NO RULES APPLYThe idea with Superior Drummer 3 is to let you step into a virtual studio with the best possible raw material and mix options at your disposal to create drum sounds in an environment where only your imagination sets the limits. Combining the creative power of the sounds, the ambiences and the extensive set of features, Superior Drummer 3 is more than just a drum sampler – it’s a bottomless well of creativity. It bridges the gap between acoustic and electronic and lets you venture off into completely new sonic landscapes. This is the definitive tool for percussive sound design.Release notes for Superior Drummer 3.2.4Superior Drummer 3.2.4 is now available to download using the Product Manager or from the ‘My Products’ area in your Toontrack account. Please note that version 3.2.4 is required for the support of Superior Drummer 3 products released from this point forward (Q4 2020).CHANGESE-DrumsAdded e-drum presets for TD-27, SD200, SD600 and SD1200.BUG FIXESGeneralPlaying instruments with missing user samples can no longer cause a crash.Undoing loading a user preset did not restore the previously loaded preset name correctly. The preset name was sometimes not recalled correctly when loading projects either.Song TrackUsing “Search with Tap2Find” in the song block context menu could lead to a crash later when interacting with the song block.Right-clicking a not selected song block and choosing Mute or Unmute no longer causes a crash.Edit Play StyleAmount changes were not loaded correctly from projects, so if a project was loaded and saved again, any Amount changes would be lost.Copy/paste in Edit Play Style always pasted the MIDI on the original drum instead of the one the user clicked on.Drums TabChanging the MIDI mapping for an instrument would sometimes lead to a crash.Grooves TabE-drum mappings on linked folders (both existing and previous/unlinked) can no longer affect Toontrack MIDI.MixerPeak meters on the right channels in the mixer measured the wrong signal.Release notes for Superior Drummer 3.2.3BUG FIXESSong CreatorClicking on a Song Structure could lead to a crash.Using a “Replace … on Track” function could lead to a crash.Song TrackUsing “Change Tempo” to increase the tempo in a song block caused a crash.Edit Play StyleChanging Amount for a future hit instrument (shaker/tambourine) could lead to a crash.Team MORiA Note：(v3.2.4 FiXED)FiXED: No Asking Authorise for Libraries.REQ:Operating Systems:Mac OS X 10.6 or higherBig thanks to ViP Team for exclusively providing installerYou don’t know our names, but you know who we are!We don’t sign our releases, but you know who provided them!We’re keep going deeper underground… to provide you the best stuff!And still no one can stop us! True legends stays in history!ViP TeamTeam V.R Note:just install** – Factory Library or other library download & install separatelyHome page – https://www.toontrack.com/product/superior-drummer-3/